We’re just not that into him 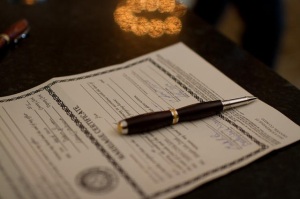 It was a quickie wedding. The groom had been waiting a long time to make her his bride, but when she finally said ‘Yes’ she insisted on a short, civil ceremony and wanted no celebration. They exchanged vows and then she went off to hang out with her friends.

He made a home for them, but she was there only an hour or so a week. Some weeks she wouldn’t come home at all. They rarely communicated, and when they did it was usually because she needed something from him. Though she was his wife, she never spoke of him to her friends and coworkers, and her behavior gave little evidence that she was committed to anyone. She proudly considered her life her own and felt no desire or compulsion to involve him in her affairs.

When asked, she would own that she was called by his name, but would be hard-pressed to describe him to anyone. She didn’t feel it was necessary to really know him, nor to consider his feelings or desires. Rather, she felt he had a responsibility to know and take care of her and see that she was happy. When she wasn’t, she blamed him and questioned whether he loved her. But though she expected love from him, she seemingly had no clue that he might expect her to return his love. And she did not.

A sad and unjust scenario, huh? Marriage is a reciprocal relationship, and few would consider this couple effectually married in the true sense of the word. And most would charge the wife with selfishly cruel disregard and even abandonment.

I’ve had several people close to me, when discussing faith in Christ, contrast their life with mine by insisting that, “I’m just not as into it as you are.” They claim to be believers, but they view my commitment to live by my faith, making God central in everything I do, as inessential and probably a bit extreme. What they don’t seem to understand is that being a Christian means entering into a relationship with God that is very similar to a marriage. And even more important than a marriage, because we owe our very existence to him, and our relationship with our Creator continues into eternity. Not so these marital covenants we enter into on earth.

If you know the Old Testament at all, you know that God likened the nation of Israel to the bride that he chose, nurtured, and cared for. And that he charged the people with adultery when they forsook him for other gods. And in the New Testament, we have several parables told by Jesus where God is understood to be refusing entry into his kingdom of heaven to those who “do not know” him. Though they know who he is, and may claim to have been invited or to have done good works, if they do not have a relationship with him, they cannot go in. Interestingly, the word translated “know” in the parable found in Matthew 25 is the same one used in Matthew 1 to convey that Joseph and Mary did not consummate their marriage until after the birth of Jesus. He ‘knew her not.’

I fear that the Church has largely failed to communicate the true essence of faith as a covenant relationship, and in the process led many into a false sense of security, with talk of just ‘praying the prayer’ and you’re in. How many effectively ignore God but consider themselves saved because they said a few words? Faith is not mouthing an incantation and salvation is not by words or works. It is entering into a trusting, submissive relationship with your Heavenly Father through his Son Jesus Christ, subsequent to which you receive his Holy Spirit.

Read the words of Jesus in Matthew 7 and 25 and feel the shock and despair of those who expected to enter and were instead cast out. And know that this will be the experience of many on the last day. I pray it isn’t of any I know and love.

I don’t hold myself out as a model Christian…please don’t read that. I’m far from it. But “I know whom I have believed,” and I love him, acknowledge him, and try to please him. I fail to always put him first, and still fall into stubbornly wanting my own way. But my God and Savior is never far from my thoughts, and because he loves me and we have a relationship, he convicts me of the things that keep us from true intimacy so that I can repent of them. And through his Spirit, he empowers me to become more like him, because we can only truly be intimate with those of our own kind.

Have you said “I do” to the lover of your soul? Are you also loving him in return? Are you in a true relationship with God, or have you signed the marriage license and split?

3 thoughts on “We’re just not that into him”