If anyone were to ask me why I am a Christian, I might answer something like, because I believe the Christian worldview to be the best explanation for all that we know about and observe in reality. I believe Christianity is true because it offers the most coherent paradigm for making sense of the world.

Everyone who attempts to explain why things are the way they are comes at it from some worldview. And every worldview worth its salt (‘cause you know 97% of the world’s water is salt water) needs to account for all of reality in a consistent, logically compatible way. So if your worldview, for example, seems to have a rational explanation for why the universe exists but not for why it appears so incredibly designed, it’s insufficient. Or if it seems to present a plausible foundation for inherent meaning in life but cannot rationally account for the historical evidence for the resurrection of Jesus and the genesis of Christianity, it’s weak and inadequate. 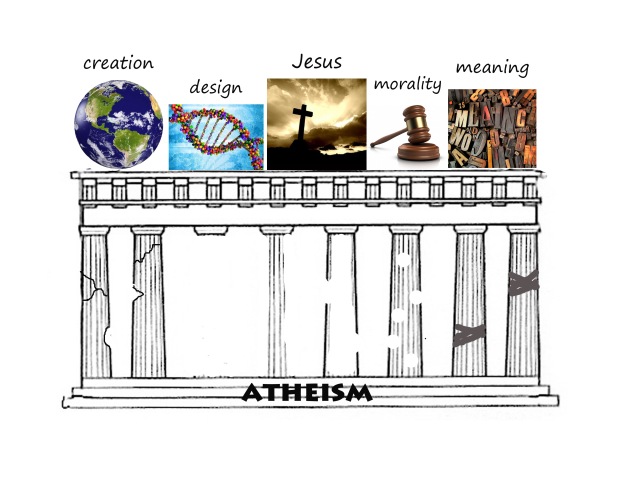 Lookee what I made

A worldview with atheism as its foundation cannot support the totality of fundamental realities that beg for explanation. Materialism has no answer to why anything exists at all and can’t ground the presence of obvious design. It has no rational explanation for the empty tomb and the explosion of Christianity apart from the resurrection. And despite what the atheist’s intuition tells him, morality cannot be objective and life has no inherent meaning.

Agnostics and skeptics similarly struggle to answer the existential questions of life without an acknowledgement of the divine. They must either co-opt the atheistic worldview, or in choosing not to commit to any particular beliefs, assume a worldview without any support at all. Leaving reality to collapse into a broken, mangled mess of unanswered questions.

Many unbelievers who reject the notion of God hurl objections like rocks trying to create holes in the theistic or Christian worldview, without seeming to realize that they need to fill the holes with something else. Though the notion of the supernatural may be difficult for some, it can’t be discarded as an explanation without replacing it with something more reasonable and coherent.

And comprehensive. Reality is in the singular and represents a unified concept. A rational and persuasive worldview will be comprehensive and unified as well.

← Simple mathematics is the key to happiness. Who knew? *
Big Daddy is watching * →