The man who would be toast

What do you suppose is the most important question you will ever have to answer: Will you marry me? Do you know why I pulled you over? Do you feel lucky? Certainly the answer to any of these could be life-changing, with the added bonus of having the potential to make someone’s day. But none of them is THE most important question.

This question requires something other than Yes or No, and some suggested answers have been: zealot, revolutionary, teacher, prophet, Democrat, Republican, Superstar, lunatic, liar, Lord.

Who do you say that I am?

Jesus. An historical figure whose influence was great enough to change the way we measure time, is still exerting a powerful 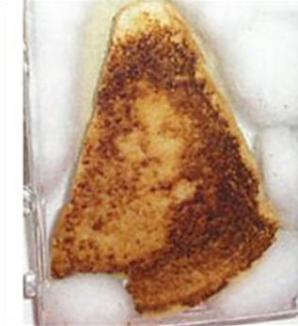 influence today, nearly 2000 years after he left this earth. Loved by millions, hated or ignored by millions more. His name censored from secular gatherings, unless it’s spoken as an expletive. His life and teachings memorialized and trivialized, canonized and demonized. His question to his disciples echoing through the centuries, awaiting an answer from all who have heard of him: Who do you say that I am?

Jesus claimed to be God, but he was also a man. Schizo? He stilled the wind and the waves, but allowed mere mortals to beat, spit on, and crucify him. Unsure of himself? Taught that unless we “hate” our own parents we cannot be his disciple, and that eating his flesh and drinking his blood will give us life. Deranged megalomaniac?

Can you say, “stumbling block”?

Jesus is his own stumbling block because he’s such an enigma…we don’t quite know what to make of him. The historical evidence of his existence is too reliable, so we can’t dismiss him as legend. And his claims about himself and reports of his activities are too incredible and far-reaching, so we can’t dismiss them as unimportant. We must deal with them. We must deal with him.

Either Jesus was/is God or he wasn’t/isn’t. That’s the crucial distinction. If you come down on the side of wasn’t/isn’t, you have to account for a few things:

If Jesus was only human and not also divine, a really good explanation for the incongruities of his life and ministry is required, and I’ve never heard one, nor believe there is one. Yes, he’s an enigma, but only to those whose apprehension of him is superficial, who have never personally dealt with him, nor the record of him. Whose exposure to him is limited to perhaps uninterested church-going, TV parodies, and news items of folks claiming his image miraculously appeared on barn siding, or toast. But if anyone would simply recognize the implications of belief in or rejection of Jesus, and humbly and honestly interact with the Gospels, one would find that they can, in fact, be prepared to answer the most important question. Because it will be asked…of each one of us.

Who do you say that I am?

← Of mercy, and justice
What are we to make of this Jesus fellow? →