Today, you will be with me

A Catholic family member has frequently cited John 17:21 in his defense of the Catholic Church.

that they may all be one, just as you, Father, are in me, and I in you, that they also may be in us, so that the world may believe that you have sent me.

He sees the Church as the answer to Jesus’ prayer here in that she is a body of believers united under one head in contrast to Protestantism with its thousands of denominations divided by doctrinal disputes. Therefore, the Catholic Church must be what Jesus had in mind and the true fulfillment of his promise to build his church. 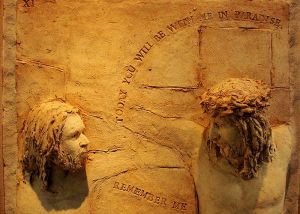 But if that’s true, it’s very difficult to reconcile with much of what Jesus also said. In particular:

The thief crucified next to Jesus went directly to Heaven upon his death because he acknowledged him as the Son of God and submitted to him in faith. Even though he:

This condemned man, consigned to his fate but not willing to go quietly, initially joined with his compatriot on the cross and the angry crowd in hurling insults at Jesus. But as the agonizing ordeal progressed and he heard the Jewish leaders scoffingly mock his claim to be “the Christ of God, his Chosen One,” and watched the way Jesus humbly endured his suffering, even asking his Father to forgive those who mocked and put him there, this guilty criminal believed and “passed from death to life.”

Jesus, remember me when you come into your kingdom. Luke 23:42

“Today, you will be with me,” Jesus said to him. No preliminary pit stop in Purgatory first, which would likely last for years since he had just insulted the Son of God to his face. That very day he would be in the presence of a holy God because that very day his many sins were paid for and removed from him “as far as the east is from the west” by the very one who hung next to him as an innocent sacrifice, without spot or blemish.

But the Catholic Church would have us believe that Jesus ordained salvation to be attained only through her, by submitting to her authority, partaking of the sacraments, “cooperating” with God’s grace by performing meritorious good works, and suffering the painful purging of our “venial” sins after death (one unconfessed “mortal” sin sends us directly to Hell)…in stark contrast to the simple gospel of salvation by faith alone that Jesus demonstrated from the cross, and taught in his ministry:

His chosen apostles also testified to the simple gospel of salvation by faith alone. Just a few of the many examples:

The unity that Jesus prayed for in John 17 is realized in the oneness that every true believer has with the living God and with other believers because of the gift of the indwelling Holy Spirit when we submit to him in faith. Disputes about doctrine may divide us in the details, but if our faith and trust is in Jesus as God and Lord, we are one with him and need know nothing beyond that to be with him where he is…forever.

← Sola Scriptura or a three-legged stool?
Rebel within a cause →

4 thoughts on “Today, you will be with me”