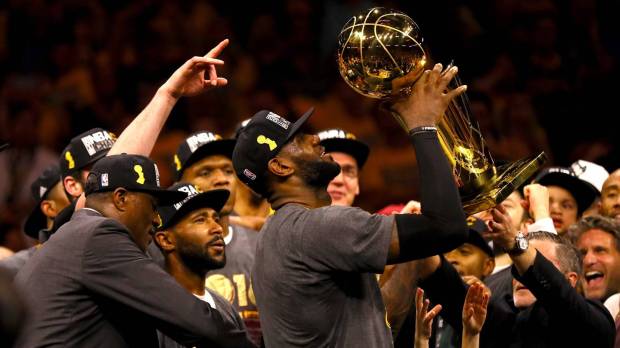 The excitement in Northeast Ohio has diminished some since the Cleveland Cavaliers won the NBA championship a few weeks ago. But one still needn’t drive far before seeing Cavs colors and logos in store windows or a celebratory sign like, “The curse is over!” The 52 year-long championship drought that felt like a curse thwarting our major sports teams every time they got close to winning…finally broken.

So we have been freed from the curse. Whoo-hoo! Or have we? Have you? Hold that thought.

As I write this it is Independence Day here in the States (she says as if she actually has a multi-national following). On this day we commemorate and celebrate our freedom from another curse of sorts…the curse of tyranny under the royal thumb of King George III. Our forefathers declared their independence, fought a costly war over it, and over 200 years later we who did not share in their sacrifice are freed from the curse.

Similarly, we in Northeast Ohio felt ourselves under the “no championship” curse and were freed of it through the efforts of others. We get to enjoy being champions even though most of us were sitting comfy on our couch or throwing back a few cold ones at the pub while LeBron and company were doing all the dirty work. I don’t know about you, but that’s how I like to win a championship.

The point is, our freedoms…our redemption from curses not of our making…were for most of us likewise not of our making. We did not secure them; we simply enjoy them. Our democratic freedoms we enjoy simply by being born in the US of A. Our redemption from the curse of the giant “L” (for Loser, in case you’re so used to winning you’ve not had to yearly look the condemning thumb and forefinger in the “hand” and don’t even know what it stands for) we enjoy by merely aligning ourselves with the (finally) winning team.

But there’s another curse we are all under, no matter when or where we live. And this one IS of our own making. In our solitary moments we feel its oppressive foreboding, and though we can be quite successful in ignoring it through busyness and entertainments, we nevertheless stumble through life under its weight, unable to free ourselves. It’s the curse of sin…our predilection for it and the penalty prescribed for it. No matter our religious beliefs, we are under the curse. Personal guilt is a universal experience and testifies to the reality of a standard missed, a duty denied, and a restitution required. And until restitution is made…until we, or someone, can pay it, we are cursed..

Thanks be to God that freedom from this curse, like the others, was secured for us, and we need only believe it and enjoy its benefits. Though he as our Judge decreed the curse, he as our merciful Substitute and Savior satisfied and freed us of it.

But…the curse was not lifted en masse like the curse of the Cleveland sports teams. It was not removed for everyone simply by virtue of being born into a nation…or a religion. Freedom from this curse is available to everyone, but a transaction is required first. We must be willing to exchange the domination of sin for the gracious and merciful sovereignty of a loving Father God. To repent of the deeds that brought on the curse and submit to the one who sacrificially freed us of it.

And you know what? When he sees our willingness, he enables us to offer the exchange. And then he transacts it, and we are freed forever of the only curse that is eternal. Eternally binding if we reject the one who secured our release from it, and eternally broken when we receive and believe.

Are you relying on doing more good things than bad as an antidote for the curse? The one “to whom we must give account” has said that works won’t work. Only in trusting in him and the redemption he wrought will the curse be removed.

← Purgatory as a perennial time-out
It ain’t necessarily so →