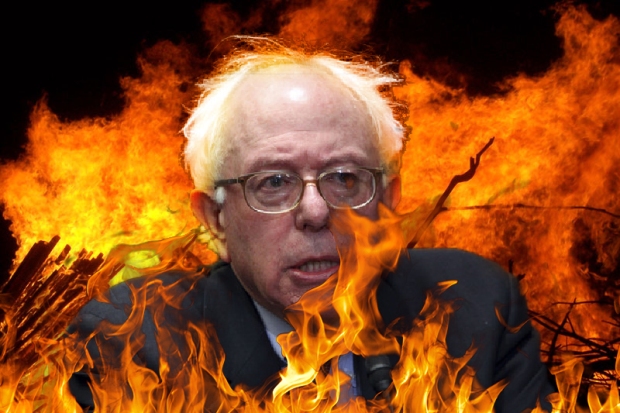 Vermont senator Bernie Sanders has been feeling his own “Bern” lately…taking some well-deserved heat for his religious litmus test of Russell Vought, President Trump’s nominee to be Deputy Director of the White House Office of Management and Budget. You can watch the exchange here, and this page has the transcript, but I don’t want to talk about the constitutionality, or lack thereof, of his remarks. The more important issue is the factuality, or not, of Mr. Vought’s statement that the senator took issue with.

Sanders: ‘You think your statement that you put into that publication, they do not know God because they rejected Jesus Christ, His Son, and they stand condemned, do you think that’s respectful of other religions?’

Senator Sanders, like so many, seems to be viewing religious belief as a strictly personal perspective that makes no universal truth claims. So to assert that opposing religious beliefs are mistaken is illegitimate and arrogant, and declining to do so is being respectful. It doesn’t matter that the different religions are fundamentally contradictory…it’s all just preference and partiality.

But all religions do make universal truth claims, including Islam, which Mr. Vought was referencing in his published statement. Islam condemns those who believe that Jesus is God…so, all Christians like Vought. And me. I can’t help but wonder how the senator would question a Muslim nominee who had publicly expressed this Quranic doctrine. My guess is he would be eager to confirm any otherwise qualified candidate who didn’t happen to be an outspoken evangelical Christian.

Watch the clip and see how angry Sanders gets over a simple expression of what Christianity has always taught and hear how positively intolerant he is when he asserts that, “this nominee is really not someone who this country is supposed to be about.” Is that being “respectful of other religions”? Is the senator not in fact saying that Mr. Vought is wrong in his beliefs and should be condemned?

To be respectful of other religions is simply to be respectful of the people who follow them. As Mr. Vought testified, “As a Christian, I believe that all individuals are made in the image of God and are worthy of dignity and respect regardless of their religious beliefs.” It can’t mean to treat as irrelevant each religion’s existential truth claims. That would be nonsensical and irresponsible.

But that’s the world we’re living in…truth is increasingly becoming irrelevant, unknowable, or completely subjective. Let’s just all be tolerant of each other’s “truth.” How’s that working for us?

One thought on “Feel the burn”