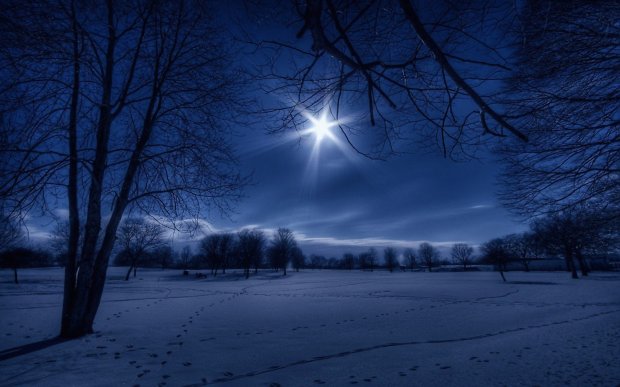 When Ruth’s father opened his eyes the prison guard was at his elbow, the hand and ankle cuffs clipped to his belt. “Let’s go sit in the waiting room,” he said to his charge, and the two started down the hall. Along one wall a bank of windows revealed a beautiful, wintry landscape softly lit by the moon, and giant snowflakes just beginning to fall like thousands of tiny, white parachutes.

“What time is it?” Ruth’s father asked, stopping to take in the beauty of the season.

“One AM,” the guard answered, glancing at his watch.

Still looking out at the tranquil December scene, the innocent inmate recalled a declaration. “A Savior has been born. He is Christ, the Lord.”

“Huh?” The guard looked out the window expecting to see someone out in the snow.

“It’s Christmas Day,” Ruth’s father said as he turned to look at the other man. “Merry Christmas.”

“Yeah, same to you. Too bad both of us have to spend it here,” he responded sadly. “Let’s go sit down.”

The waiting room was just at the other end of the hall…small but comfortable, with a cooler of bottled water and a basketful of K-cups and a Keurig. No snacks though, the slightly overweight guard was disappointed to find.

“Tell me about your family,” Ruth’s father said as they both sat down. “Will you be seeing them later today?”

“Well, I’ve gotta’ work but there’s nobody I’d be seeing anyway,” he replied with a sigh. And for the next few hours the guard shared his life story…a troubled childhood, two failed marriages, an estranged son. Things he hadn’t talked about with anyone in years. He was amazed at how easily they came pouring out of him as he sat across from this convicted thief who just listened intently, occasionally asking a clarifying question. When the guard felt like the other man had heard enough of his story, he asked him, “What about you? What happened with your daughter?”

“I have some similar stories. But there’s something, or someone, that’s made a huge difference in mine.” Ruth’s father then began to tell the guard about how God so loved the world…loved the people he had made…and about how we all reject him in some way.

“I did a lot of things for my own sake as a husband and father, instead of selflessly loving my wife and daughter the way God wanted me to. We all act selfishly…we choose our own way instead of God’s. And that’s basically what sin is. Because he’s holy and just he has to punish sin. Think of all the ‘punishees’ you deal with every day. They did the crime, they have to do the time, right?” The guard nodded, following the man’s logic.

“Well, our ‘time’ for disobeying God would be an eternity…an eternity separated from him. That’s just the way it had to be unless God made a special provision. And because he loves us so much, he did that by becoming one of us so that he could take the punishment we deserve on himself. The debt was paid, but he paid it. As the God-man Jesus Christ he shed his blood, died, and was raised again and all we need to do is put our faith and trust in him and our eternity is then guaranteed to be spent with him rather than without. In everlasting joy rather than despair.”

As the guard sat quietly processing this news, looking slightly puzzled, Ruth’s father knew the parable of his own experience might help. “I love my daughter so much,” he went on, “that I would have gladly taken her punishment…spent the five years in jail…if it meant she could be free. And that’s what I tried to do. But now, if…” He paused, closed his eyes, and said a quick prayer. “If she survives, she’ll likely be locked up and I’ll be free.”

An air of somberness kept the two men silent for awhile. The monotones of a ticking clock on the wall and “Jingle Bells” faintly emanating from the speaker next to it combined for an oddly ominous undercurrent. As the worried father sat staring at the guard but seeing only the bruised and beloved face of his daughter, he considered the trade he had made because of his love for her. “My freedom for hers,” he thought to himself. “But now…now I pray I can trade it back.”