The battle for life is identification It’s kind of amazing how far those who support the right to unrestricted abortion will go to justify killing unborn children. Here’s a bit of what I’ve encountered on Twitter recently:

This got at least 5,036 likes and 948 retweets. So according to these enlightened ones, the living body of tissue, bones, and sundry organs which is killed and expelled in an abortion is, contrary to what we thought we knew from basic biology, not human. It’s merely a pregnancy. One wonders if after 45 years of legal abortion our young people believe a “pregnancy” is a concrete object rather than a description of a condition. Terminating a pregnancy requires terminating that which defines a woman’s pregnancy, i.e. the product of conception (POC), which is another euphemism used by abortionists to avoid acknowledging the intrinsic, human worth of the victim of abortion. I don’t think I’ve ever gotten anyone to give me a direct answer when I ask, if it’s not human, what is it?

One thing’s for damned sure, if you’re pro-abortion…it’s not a child. It’s only a child after it’s born. The woman who tweeted this got quite irritated with me for continuing to refer to the victim of abortion as a child instead of a fetus. I don’t care what the correct medical terminology is, if it’s a living, growing, very young male or female of the human species, it is a child. An article last year in the Harvard Journal of Law and Public Policy makes the case from the Fourteenth Amendment, and the laws on the books at the time it was added to the Constitution, for the personhood of the unborn human being, who was and is rightly called a child. 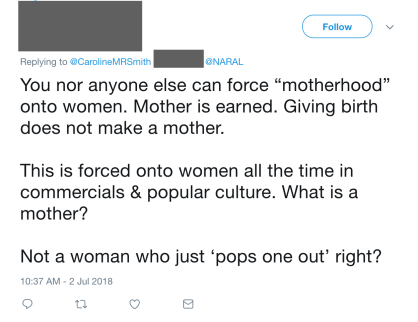 Here’s another one from someone who apparently flunked biology. This “pro-choicer” believes a woman can choose not only whether to keep or kill the child, but whether the conception of the child makes her a mother at all. Maybe it makes her a toaster.

Both of these objectors to my pro-life position argued for the non-personhood of the child on the grounds that it is totally dependent on the mother. When I pointed out that born infants are totally dependent as well and we don’t (as yet) allow them to be killed, one of them asserted that it’s markedly different with the unborn because they are physically attached to the mother by the umbilical cord. To which I replied, “The connection does not thereby make the child in the womb some kind of parasitic alien life form or an appendage of hers. Dependence does not determine human worth.” And, as might be expected, I got a “Yes, it does” from both of them. 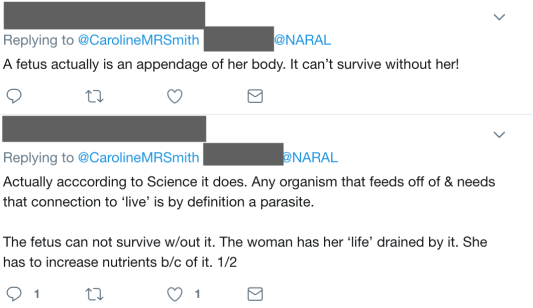 Only by denying the full humanity of the unborn child can the pro-aborts reconcile their position with the deadly deed they espouse. It is an appendage, a parasite, a product, a pregnancy, a non-person, non-human, clinically-designated fetus impinging on the bodily autonomy of the woman who just happens through no fault of her own to be carrying it, and who is its mother only if she chooses to consider herself as such.

“A morally neutral health procedure”? Only if the life snuffed out in an abortion is something other than human. But “according to Science,” reproduction is necessarily the creation of another of the same kind. The humanity of the unborn is deniable only by the sheer will of those who want an easier way out of a tough situation.

4 thoughts on “The battle for life is identification”