Where’s the line? What’s the linchpin?

Let’s take a trip up the canal. It’s not very long, but it’ll take nine months.

A child at the moment of birth, but still in the womb, looks exactly like the child given to his mother to hold after he emerges from the birth canal. He, of course, is the same child. There is no fundamental change in him that occurs by virtue of him exiting the womb. Some suppose that his first breath is exactly that…as if he in an instant evolves from amphibian to mammal. No. He is simply changing location and adapting to his new environment, as he was designed to do.

So it should be clear to anyone who wants to see (and there are many who don’t) that to abort this child at the moment of birth is to murder him. But what about a month before? Same child…a little less developed. Looks just like his ready-to-be-born self, only smaller. Would killing him then not be a crime? Justifiable? Many children are delivered at this age and most of them go home healthy. Is the child’s existential status any different a month before birth?

Let’s go back a little further. At 20 weeks gestation (that would be 20 weeks he’s been alive) he’s got 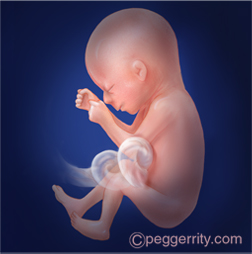 eyelashes and fingernails; can hear, swallow, and scratch himself; and has a pleasing baby form. He’s got a developing nervous system and circulatory system, excretory and skeletal systems, digestive, lymphatic, muscular, etc. etc. But we’ve gone halfway back from the moment of birth. Where’s the line that now makes this child not a person with an inalienable right to life? What’s the developmental linchpin that transforms him from non-personhood to personhood? And does it occur at the exact day of gestation for every child? What if the calculations are off? Would it be murder on Wednesday but a mere “termination of pregnancy” on Tuesday?

Fast backward 12 more weeks. The child has a heart that is beating. He looks less pleasing than at 20 weeks, but what makes him less human? What does he not have within himself that he must have in order to deserve to have his life protected?

These are questions that those who advocate for abortion must answer. Most of them talk only about “reproductive health” for the mother and her bodily autonomy as if the child’s body is part of her own, because they know they cannot answer them. Many of them have gone to such extremes to protect the right to kill children that to honestly face the reality of the status of the child is too risky. So they refuse to look.

And in selfishly and stubbornly denying the humanity of innocent children in the womb, they have become less human themselves.

4 thoughts on “Where’s the line? What’s the linchpin?”