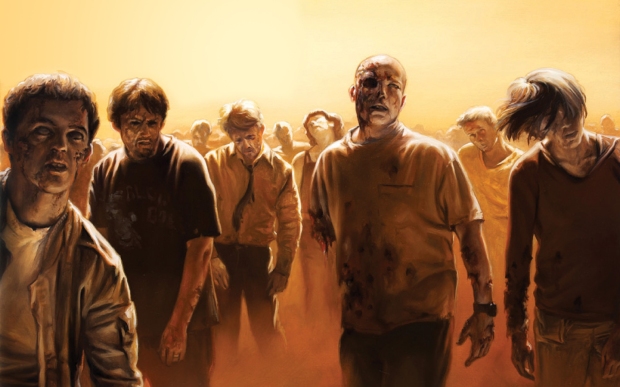 I grew up in a funeral home, where on any given day maybe 12 feet away from where my siblings and I were eating, watching TV, doing homework, or arguing about whose turn it was to do whatever, a dead body lay. Not in the same room…that would be weird…but in a room beneath our living quarters.

Below us, in the dead quarters, lay the lifeless remains of one, sometimes two or three individuals who had recently met the fate that awaits us all. My siblings and I periodically were a lot closer than 12 feet from the dead bodies and so were familiar with their heavily made up, expressionless faces and cold, folded hands. Nothing going on in there, we knew.

I wonder sometimes how many dead people each of us come in contact with on any given day. Walking dead, that is. Because just as our bodies either have life or don’t, and that is quite easy to discern, our spirits are counted as either alive or dead, but that is not so easy to discern. A body you can see; a spirit is immaterial and invisible.

So am I talking about zombies here? No. I’m talking about the difference between those who have been regenerated and those who are disconnected from the power source and running on limited battery backup.

When God created man and woman he gave them one prohibition and told them if they violated it they would die. Well, they did but they didn’t. They ate the fruit but their bodies didn’t die. So what did? The way I understand it, their spirits became separated from God, and as physical death is a separation of the spirit from the body, spiritual death is a separation of our spirits from God’s.

Ever since then, God has been working to reconnect each of us to himself, who is the source of Life. He stands ready to supply us with eternal power, to regenerate us by giving us his own life, but we have to plug in. We have to want the life; he won’t force it on us.

Spiritually lifeless people are mostly unaware that they are one of the walking dead. But those who are alive can often spot them. If we are doing God’s work in restoring spiritual life to the spiritually dead, we may have to point out the disconnected cord. That’s why we evangelize and apologize (as in, do apologetics). 🙂 Optimally, our lives will be so vibrant and life-giving that they will recognize it themselves, and we’ll be a walking sign for a spiritual hot spot. Unfortunately, our own connection can get cluttered, garbled and slowed by our selfish desires so that our lives look no different from theirs. Why would they think we have anything they don’t?

Still, the reality is, many who are walking around and look quite alive are actually quite dead…spiritually-speaking. How does one discern if they’re disconnected from the source of life? I would say, if you have a nagging sense that something is missing from your life, that’s probably it. You could get plugged back in right now where you sit by simply telling God that’s “watt” you want.

Then get ready for a supernatural power surge.

← Check more than your privilege
The defeat of the Justice League →

3 thoughts on “I see dead people”