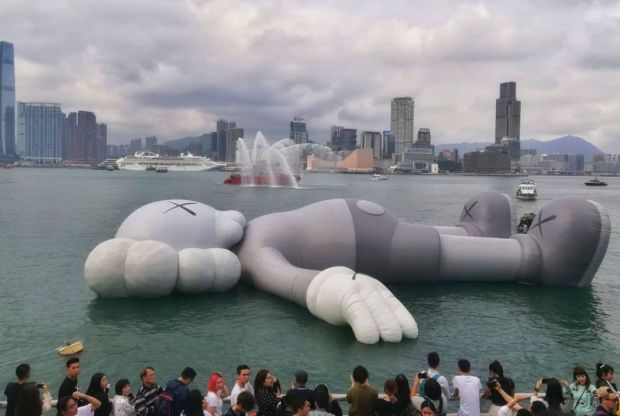 If you’re in Hong Kong right now, you have just a few more days to see this gigantic floating sculpture drawing attention in Victoria Harbour before it is removed at the end of a month-long art fair. Created by an American artist who goes by the name KAWS, this 121-foot-long, human-like figure he calls Companion is impossible to miss not only because of its size but also on account of its peculiarity. That is not what one expects to see bobbing along on a busy harbor.

As unusual as is the sight of this huge piece of art floating among the cruise ships, fishing boats, and freighters, imagine how much more unusual would be a lack of curiosity from onlookers as to its origin. If tourists, residents, and workers gave no thought to where it came from and why it’s there we’d think them quite peculiar themselves.

Now, it’s true that some people are just more curious than others, but it seems to me that any thinking person when confronted with an unexpected reality would have some questions they’d like answered: Where did this come from? Why is it here? Who or what is responsible for its existence? I’m sure if I hadn’t given you some details about the massive floating figure above, and the image had piqued your interest, these questions would have been on your mind.

So what about THE most unexpected reality…the existence of the universe? Here’s question #6 for the non-Christian:

Do you have a reasonable explanation for why anything at all exists?

Why is there something rather than nothing? Does your religion or worldview have an answer to this ultimate of all existential questions? The late Stephen Hawking famously claimed that atheism can answer it. In his book The Grand Design he says,

Because there is a law such as gravity, the universe can and will create itself from nothing.

Well, that’s an answer alright. But it’s not a coherent one. Even crazy-smart scientists can get a little crazy-stupid trying to account for all reality without invoking a supernatural being. The notion that something can create itself is frankly and utterly nonsensical.

The theistic religions of Islam, Judaism, and Christianity have a coherent answer to the question of the existence of all that is. Whether or not our answer is true is a different question. But at least it makes sense to conceive of a supernatural, super-powerful being who transcends the universe and brought it into existence. But I cannot conceive of any satisfactory alternative answer.

Non-, pan-, or polytheistic religions like Buddhism or Hinduism either avoid the question or have quite fanciful and unsupportable answers. But the question is quite reasonable and begs for a rational answer. “No, I don’t have a reasonable explanation for why anything at all exists” is a rational and honest response but it should leave the respondent unsatisfied. Because it’s such a foundational question.

Even though one’s belief about the origin of the universe…if one has one…is quite unprovable, we can still infer to the best explanation. And even apart from all the other evidence we have for the existence of God, the best explanation for the existence of the universe is still that something outside the universe brought it into being. Nothing comes from nothing and if anything at all exists, something must exist necessarily. And that something must be a personal agent able to choose to create or not create.

If you have a better explanation I would be pleased to hear it.

5 thoughts on “Questions for non-Christians #6”