I refuse to believe that abortion-rights advocates who argue “My body, my choice” are so stupid not to recognize that the unborn child is not, in fact, part of the woman’s body. No…it’s just too obvious. Stupidity would actually be more of an acceptable excuse for advocating for the killing of innocent children. But there is no excuse for what is more likely a stubborn obstinacy in refusing to acknowledge the truth in order to protect a woman’s preferred position of total bodily autonomy. It is a willful blindness to the presence of a unique human body within a body, and as such, is condemnable.

This argument from a woman’s rights over her own body is the subject philosopher Francis J. Beckwith addresses in Chapter 7 of his book Politically Correct Death: Answering Arguments for Abortion Rights (1). The claim is “that because a woman has a right to control her own body, she therefore has a right to undergo an abortion for any reason she deems fit.” But, as Beckwith points out, apart from the question of whether such an absolute view of personal autonomy is sustainable ethically or legally, this argument logically fails. 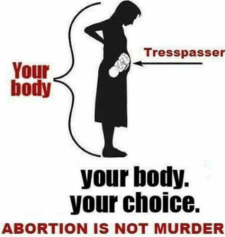 At least spell it right.

First, the all-too-obvious but nevertheless denied reality that in abortion we’re dealing with two bodies, not just one. The author quotes several supposedly smart people making the supremely stupid claim that the unborn child is part of the woman’s body like an arm or a leg. Never mind that it has a different genetic makeup and often is a different sex. “To say that the unborn entity is part of her mother is to claim that the mother possesses four legs, two heads, two noses, and with the case of a male fetus, a penis and two testicles.”

Interestingly, though a pregnant woman may say her embryo or fetus is part of her body, her body itself knows different. Beckwith cites Dr. Bernard Nathanson again explaining that immunologic studies show that at implantation “the defense mechanisms of the body, principally the white blood cells, sense that this creature now settling down for a lengthy stay is an intruder, an alien, and must be expelled.” The child’s body also has an “extraordinarily efficient defense system” which in most cases succeeds in repelling the attack from the mother’s white blood cells. Unfortunately, the child is completely defenseless against the deadly tools of the abortionist.

Secondly, the argument is guilty of “special pleading” which is “a fallacy that occurs when someone selects pieces of evidence that confirm his position…and ignores counterexamples that conflict with it.” So the abortion advocate arguing from a woman’s bodily rights is ignoring the counterarguments for the rights of the unborn child, not to mention the rights of the man with whom she created that child. Shouldn’t the father have some say in what is done to his child?

Beckwith compares this with the conflict between smokers and the non-smokers whose health is endangered by second-hand smoke. The smoker who objects to a prohibition of smoking in public places will appeal to his right to do what he wants with his body, but his argument completely ignores the rights of others to protect their bodies from harmful substances.

Pro-life advocates support a woman’s bodily autonomy properly viewed. But it doesn’t justify abortion, because as Dr. Beckwith states, “no one’s right to personal autonomy is so strong that it permits the arbitrary execution of others.”

But what about the claim that abortion is safer than childbirth and therefore morally justifiable to protect the mother? That argument is answered next.