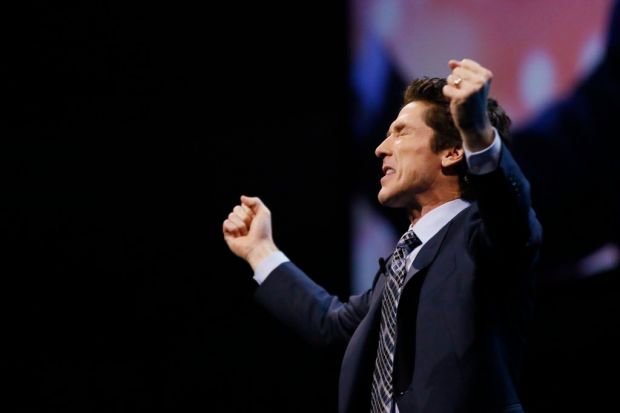 (Continuing with my reassessment of Joel Osteen and his ministry. Please see yesterday’s post for Part 1.)

Jesus did say that
In Matthew 21:22 Jesus says, “whatever you ask in prayer, you will receive, if you have faith.” Other New Testament verses give a similar message of believing and receiving. How many Christians have struggled with this promise, unsure of the extent to which it applies? Osteen takes it at face value, teaching that once you have prayed for something in faith, “in the unseen realm things have changed” and it’s just a matter of time before things will change in the seen realm. That thing you have prayed for…healing, overcoming an addiction, financial need…will be given you if you just “stay in faith until it manifests.”

So he’s criticized as promoting a “name it and claim it” theology contrary to biblical teaching. But look again at what Jesus said in Matthew 21. From what I heard at Lakewood Church it seems to me Osteen is just running with that verse and the others like it. That’s not to say that he’s presenting a complete, biblically sound understanding of praying in faith, only that his teaching reflects a belief that “whatever you ask in prayer, you will receive, if you have faith.” And that he feels called to encourage others to persevere in faith because Jesus said they will receive what they ask for if they do.

No Body is perfect
It’s often said that if you think you’ve found the perfect church don’t join it, because then it won’t be perfect anymore. In other words, no church is perfect because it’s made up of imperfect people…from the pew to the platform. All of our churches fail in some way to thoroughly and accurately reflect and teach the truth of God’s Word and be all that God wants his church to be. Most if not all churches, denominations, and preachers promote doctrines or practices that some Christians object to as biblically unsupportable, improper, wrongly emphasized, misleading, etc. But they’re still embraced as part of the Christian community, unlike the condemnation and judgment that Joel Osteen gets.

God is lifted up
Perhaps Osteen focuses too much on lifting up God’s image bearers from our worries and discouragements and not enough on how we tarnish his image, but I did hear and see God himself being lifted up at Lakewood Church as well. In the singing and the preaching God was truly praised as the source of our hope and help, the one who hears our prayers and responds in love, and he in whom is our trust and confidence.

Before getting into his message, Osteen invited attendees to come down to the front for prayer and then he stood in front of one of the cameras, looked directly into it, and prayed for all who were watching the livestream. He prayed at the beginning of his message and at the end, and pretty much all of it I could say Amen to because the focus was on who God is and what he has done and will do.

He concluded the service with an altar call, asking all who wanted to commit to following Christ to stand and then leading them in a prayer of repentance and faith. He acknowledged that we all need cleansing from our sins, then assured those who stood that the moment they did, God washed them clean. Amen.

Unite to fight the real enemy
In our zeal for truth and orthodoxy, we Christians are quick to segregate ourselves along particular doctrinal lines, freely criticizing those who disagree with our understanding of God’s Word and his will, or who don’t “do church” like we do. Instead of being one as Jesus prayed that we would be, we are divided and many.

Perhaps we would be more effective at evangelizing the lost if instead of discord and disagreements the watching world saw a united front carrying the banner of “mere Christianity” as C.S. Lewis promoted (who, by the way, despite his wide acceptance as one of Christianity’s premier thought leaders, has his detractors in the church as well). If seekers and skeptics don’t catch the message that being a Christian simply means you trust in and follow Jesus as the risen Son of God, because what we’re throwing are jabs at each other over interpretation, emphasis, and style, it seems to me we’re as guilty of failing to present the pure gospel as we accuse Joel Osteen of.

And while we’re arguing with and criticizing each other, our real enemy is advancing unimpeded to take down the whole lot of us. Better to turn our weapons on groups like the Freedom From Religion Foundation atheists who, never missing an opportunity to threaten lawsuits over supposed unconstitutionality, vehemently complained about Kanye West’s impromptu gospel/rap performance at a county-run Houston prison when he brought his full Sunday Service to town.