Inconsistency is not insincerity 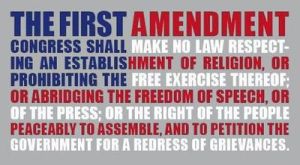 So yesterday Senate Majority Leader Harry Reid said the Democrats in Washington are “going to do something about the Hobby Lobby legislation.” (Which, of course, wasn’t legislation but a Supreme Court ruling.) Does something need to be done?

I have a few thoughts on this whole thing. One…everyone can’t have everything they want or think they deserve. There’s a TV commercial out now for a local furniture store that asserts, “Everyone has the right to great furniture.” Well…no…we don’t. And neither does everyone have the right to company-paid contraception coverage. We’ve got to really dial back the entitlement attitude in this country or we’ll be spending all our time, money, efforts, and creativity on defending our competing “rights” instead of on little things like defending our country from those who want to destroy us and our freedoms.

Second…the specter of crazy bosses everywhere dictating your healthcare choices because of this Court decision is unnecessary fear-mongering. And third…though I agree that the religious beliefs need to be sincerely held, sincerity does not require complete consistency.

Last week on Facebook, a few family members and I cordially exchanged our competing views on this issue. One of them pointed out that Hobby Lobby only objected to covering the particular drugs after being approached by an organization looking for a plaintiff to challenge the contraceptive mandate. And she linked to this blogger with some thoughts on Hobby Lobby as well. The following is some of what I had to say in response.

The blogger is painting the owners of Hobby Lobby as inconsistent in their beliefs, by pointing out that they sell Santas and Easter Bunnies, many of which are made in China, which has a horrible human rights record. Perceived inconsistency does not equate with insincerity. I’m very and sincerely pro-life, but I buy items made in China and if I had any investments (God help us – we don’t) I probably would not scrutinize the companies included in my mutual funds to ascertain if any are involved in practices I find objectionable. I admire those who do, but my failure to do likewise can be traced to other things like an inability or unwillingness to invest the time and effort on something that will likely not have much of an impact, a difference in beliefs between the two parties who must agree (my husband and I), a tight budget that makes not taking advantage of lower-priced items difficult, a less than perfect trust in God to provide (I’ve come a long way though), and simple oversight. This blogger seems to disapprove of China’s policies. Why does she support them with her dollars?

Also, her analogies comparing Hobby Lobby’s objection to Plan B to wanting all employees to get root canals, pregnant, and involved in a catastrophe if their coverage provides for them, is really not valid. A better analogy would be a company owned by an environmentally-sensitive individual refusing to include certain drugs in his employer-paid insurance coverage because their manufacturers engage in business practices that harm the earth and air and water, which he finds objectionable. Somehow, I think this blogger might have a different sort of opinion on that.

And her assertion that Hobby Lobby’s “rejection of individual freedom seems to be consistent with China’s rejection of individual freedom” is blatantly false and an unfair provocation. HL’s decision is not denying anyone a rightful freedom, only a particular and limited benefit. Every employee is free to purchase the drugs at their own expense. Or find employment with a company that will cover it. To compare them with a country that really does interfere with its citizens’ reproductive rights, denying them the freedom to have the number of children they want, is completely unwarranted and just plain wrong.

Some rights are valid and worth the time and everything else defending. Religious freedom is one of them. Others are not rights but wants, and just like in personal, commercial, and government-managed finances, we must be careful not to overspend our limited capital (be it monetary, emotional, relational, or otherwise) on what is desired, at the expense of what is necessary.

← It’s (past) time to have a national conversation about faith, truth, and eternity
Hope for the hater →