My quest – 30 years and counting

1986. I was a stay-at-home young mother of three children, ages one to five. Though life was less than thrilling, it was really all I ever wanted…to bear and raise a couple of kids who, along with their dad, would fill my life with love. And they did. 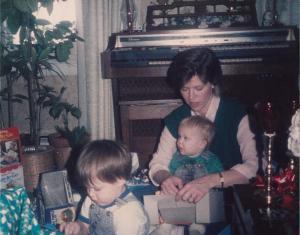 Christmas 1985. The quest was about to begin.

Yet…something was missing, and 1986, 30 years past now, was the year I went looking for it. So I’d like to take all of this first month of 2016 to recall some of the pivotal moments and events in my quest because perhaps you can relate. Maybe you’ve had or are currently experiencing a gnawing, barely describable sense of incompleteness. Can’t quite put your finger on what it is that is disturbing your soul. You feel somewhat lost, like you really should be somewhere else but you’ve no clue where that is, or why you feel compelled to search for it.

1986. My life that year looked unremarkable from the outside, but inside big changes were happening and by the end of that year I was able to remark on them. Because they were remarkable, you see. Did you know that you could stay in the same place and still be somewhere else?

Though 1986 was my year of discovery and the year I found what I didn’t even know I was looking for, my quest continues even to this day. Because with each find, every revelation, the infinite magnitude of the object of my quest becomes more apparent and I am drawn to go deeper, journey farther, venture closer.

Many others have made this quest yet it can’t be engaged in as a group, like a bus tour of celebrity homes. You have to make it on your own. You can, however, get some guidance along the way and that’s what I hope to provide by recounting my own odyssey. It’s not as exciting as Bilbo and Frodo’s but it involves similar themes. And it’s real.

I hope you’ll come along as I retrace my steps from my now 30-year-long quest, which really began before 1986. This series will be as personal as I’ve ever gotten on this here weblog. And more of a log than anything else I’ve done too. I pray it’ll be worth more than just fuel for the fire.

← What the world needs now
A cradle Catholic →