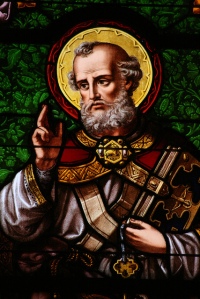 This was a claim made by the 18th century Scottish skeptic David Hume regarding the possibility of determining that a miracle had occurred. He maintained that the evidence we have establishing the laws of nature will always outweigh any evidence that they have been monkeyed with, as in the claim that a most sincerely dead man came back to life, so belief in a miracle is never warranted. Hume’s assertion has actually been shown to be fallacious, and you can read about that here, but I want to adapt it as part of my argument against the Catholic Church’s claim to be the true and only church that Jesus founded. Her assumption of that mantle is an extraordinary claim with individual and global ramifications and so, I believe, requires not extraordinary, but substantial and convincing evidence.

As I stated last time, the Scriptural evidence in support of her claim to be God’s visible authority on earth is inconclusive at best so she relies on an historical account that places a bishop of Rome from the very beginning having supremacy over the entire church with the authority she currently asserts. Is there substantial and convincing evidence of that? Not when you  consider the following:

Catholic apologists have their proof texts from the church fathers that they refer to as support for their position but they, as with the Scriptural texts, are inconclusive at best because they can and have been interpreted and understood differently by those unmotivated by a desire to bolster the Church’s claims. Some even appear to have been deliberately spun to inaccurately serve as evidence, as with this quote from Tertullian in 220 AD referring to Callistus, bishop of Rome, as Pontifex Maximus, a title still used for the pope:

In opposition to this [modesty], could I not have acted the dissembler? I hear that there has even been an edict sent forth, and a peremptory one too. The “Pontifex Maximus,” that is the “bishop of bishops,” issues an edict: “I remit, to such as have discharged [the requirements of] repentance, the sins both of adultery and of fornication.” O edict, on which cannot be inscribed, “Good deed!”… Far, far from Christ’s betrothed be such a proclamation!

The records show Tertullian was applying the term, which at that time was a title for the Roman emperor, sarcastically to Callistus, who he apparently felt was overstepping his position. But the Roman Catholic Church spins it this way:” Tertullian, as has already been said, uses the phrase of Pope Callistus. Though his words are ironical, they probably indicate that Catholics already applied it to the pope.” (6)

The Catholic Church’s claim to unbroken authority since the apostle Peter is vital to her assumed privilege as Christ’s visible representative on earth. But if the historical evidence is sketchy at best and disconfirming at worst, is she not misrepresenting herself to the detriment of all who have trusted her and trusted in her?