A doctrine according to the flesh 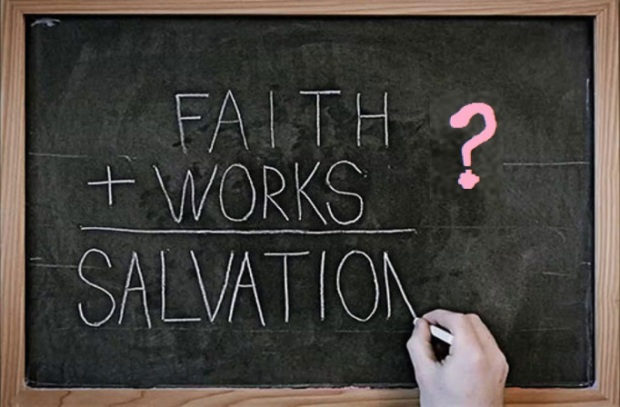 The complex and biblically selective Roman Catholic doctrine of salvation often results in Catholic apologists giving with one hand what they take back with the other. ‘You can’t win heaven, it’s a free gift. But not so fast…meritorious works are required.’ What? If it’s a gift then no payment is necessary nor would be accepted, and isn’t a payment what a “meritorious work” would be? A “free gift” is redundant, but a merited gift is an oxymoron.

The confusion this doctrinal doublespeak tends to engender in the mind of the average Catholic typically begets a resignation to futility. It’s too difficult to comprehend so why try? I’ll just trust that the clergy and apologists know what they’re talking about and keep plugging along obeying as best I can.

If you ask a dozen Catholics, clergy or laity, how one gets to Heaven, you’re likely to get a few answers that actually sound more evangelical than Catholic. But some will struggle for an answer and others will credit good works or dying in a state of grace. You’ll definitely get a variety of responses because the official teaching is ambiguous enough so that even if the average Catholic is familiar with the most current Catholic catechism, how the teaching is fleshed out in real life is left open to interpretation.

I believe the best source for a “fleshing out” that is faithful to the actual dogma of the Catholic Church is her team of professional apologists. Karl Keating is one with whom I became familiar very early after I left the Church when my parents cited his 1988 book Catholicism and Fundamentalism and implored me to read it, which I did. Keating is the founder of Catholic Answers, an apologetics ministry which produces the daily radio program and podcast Catholic Answers Live, to which he is a regular contributor as a featured apologist, and on which I recently heard him give the Church’s position on salvation. What follows is Part One of my amateur apologist’s evaluation of Keating’s professional defense.

Mr. Keating was asked to address the position many Protestants hold that salvation is a supernatural transaction which places one securely in God’s kingdom, never to be cast out. “Once saved, always saved,” is how it’s often expressed. Here’s how he begins his response:

This is the way that what’s known as the absolute assurance of salvation usually is argued…this is the way I normally hear it. They begin with Romans 10:9, and by the way, the translation I’m using here is the one by Msgr. Ronald Knox, that was made about 70 years ago. Romans 10:9 – “If you declare with your mouth that Jesus is Lord and if you believe in your heart that God raised him from the dead, then you will be saved.” That sounds pretty definitive.

It sure does. As do all the other “believe and you will be saved” verses I highlighted here. One might hope and assume that Keating is about to reconcile this definitive inspired text with the Catholic teaching that simply believing is insufficient. Unfortunately, he completely sidesteps it with a plea to considering context and “contrary” verses, never reconciling the contrariness into a coherent teaching.

If you believe that Jesus is the Lord and if you believe in the resurrection then you will be saved. So if we take it just that way and don’t go beyond that it looks as though we can talk about something like the assurance of salvation. But we need to take all the verses of the Bible in context and in the light of other verses. For example, there are contrary verses. Let me mention three of them.

Keating will go on to reference more than three, all which he interprets to teach salvation by works, without ever explaining how we are then to understand what Jesus and his apostles meant by “Truly, truly, I say to you, whoever believes has eternal life.” (John 6:47), “Believe in the Lord Jesus, and you will be saved,” (Acts 16:31), and ”For we hold that one is justified by faith apart from works of the law.” (Romans 3:28), among many other verses that seem to clearly indicate we are saved by faith alone.

I’ll address next time Mr. Keating’s contention that the apostle Paul’s use of the concept of “hope” is evidence that he believed in salvation by faith plus works.

← The Sola Fide Highway
A doctrine according to the flesh, part 2 →

6 thoughts on “A doctrine according to the flesh”