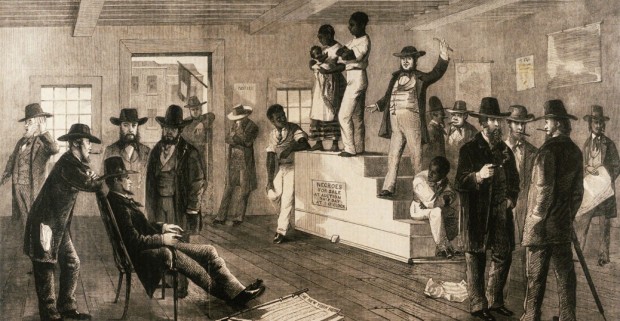 One doesn’t have to look far to find slavery in America today. There are videos of slaves everywhere…burning down buildings, attacking police officers, telling those who rely on facts instead of the narrative to f*** off.

In fact, I’ll bet there are more slaves in the US today than there were in the antebellum South. Many if not most of those black men and women, however, knew a freedom that their “owners” did not…a freedom that the slaves of today desperately need.

Is anyone fighting to abolish slavery today? Oh, yes. Fervent and committed abolitionists can be found in every walk of life, just as in the 19th century. In business, government, academia (a few), in homes, in churches, and on street corners, men and women of all races are working to eradicate the scourge of 21st century slavery.

But it’s a difficult task, because most slaves today are unaware of their chains. And if they don’t know they’re enslaved they have no time for the abolitionists, and think them nuisances at best and deluded, hateful bigots at worst. So first they need to be made to see that they are indeed a slave. Only then will they seek to be made free.

And the Lord’s servant must not be quarrelsome but must be kind to everyone, able to teach, not resentful. Opponents must be gently instructed, in the hope that God will grant them repentance leading them to a knowledge of the truth, and that they will come to their senses and escape from the trap of the devil, who has taken them captive to do his will. – 2 Timothy 2:24-26

One might wonder how these can be slaves and not know it. And can they really be said to be enslaved if they believe themselves to be free?

I wonder if there were any blacks in the pre-Civil War South who believed the lie that they were inferior to whites and quite properly property. If their “master” was decent they might have been content and felt as free as they believed was possible for them. But that wouldn’t have made them any less a slave.

Today’s American slaves are believing a lie that they are free, but that doesn’t make them any less a slave neither. When they kill, destroy, or hate they may feel like they’ve never been freer, but that’s actually when their shackles are tightest. They are doing the will of their master; it is what he has captured them for. They are serving and obeying him when they lie, steal, cheat, kill, and destroy. But he not only has them bound; he has them blind…blind to his power and control over them.

Do you not know that if you present yourselves to anyone as obedient slaves, you are slaves of the one whom you obey, either of sin, which leads to death, or of obedience, which leads to righteousness? – Romans 6:16

Jesus answered them, “Truly, truly, I say to you, everyone who practices sin is a slave to sin.” – John 8:34

In their case the god of this world has blinded the minds of the unbelievers, to keep them from seeing the light of the gospel of the glory of Christ, who is the image of God. – 2 Corinthians 4:4

Today’s slaveholder is sin, and the slave trader is the devil. Until a sinner recognizes that he is a slave, he will continue to do his master’s bidding because he is powerless to resist him. But once he sees his chains, and the light of the gospel beaming from the voice or pen of the abolitionist…the truth that Jesus Christ has redeemed him…he need only believe it and his faith will set him free.

So Jesus said to the Jews who had believed him, “If you abide in my word, you are truly my disciples, and you will know the truth, and the truth will set you free….The slave does not remain in the house forever; the son remains forever. So if the Son sets you free, you will be free indeed.” – John 8:31-32, 35-36

← Some concluding thoughts on racism
America needs a spanking →

One thought on “Slaves in America”