There is a Danish TV ad that you may have seen which is all about accepting others who are different from you…different sexual orientation, economic status, religious belief. Absent from this diverse group is anyone representing the disabled, such as an individual with Down Syndrome (DS), which is not surprising considering that in Denmark there is a widespread effort to abort all children with DS and be “Down Syndrome free” within the next decade. So accepting differences is the preferred moral principle, unless you have a physical or mental “imperfection.” In which case we kill you. 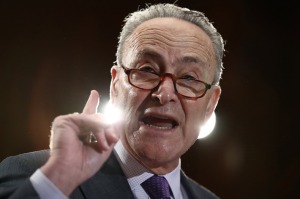 Senate Minority Leader Chuck Schumer is on my list again this week…this time for loudly berating a woman because she voted for Donald Trump, making a scene inside the Manhattan restaurant where they were both dining, and even following the woman and her husband outside to continue his verbal assault. This is how a leading Democrat views democracy…if you don’t vote for his candidate you deserve abuse?

students were being suspended more than three times as often as whites and the White House blamed that on the teachers. Not surprisingly to anyone familiar with human nature, the softened disciplinary procedures of encouraging “the student who has misbehaved to reflect on his behavior, take responsibility, and resolve to behave better in the future” instead of suspending them resulted in an increase in violence, drug use, and gang activity.

MAY I PLEASE SPEAK TO MY DADDY?

The best solution to curbing rebelliousness and violence among young people is not less discipline but more. And specifically the kind that a child can only get from his father…from one who has a loving interest in the child’s education and behavior. This article speaks poignantly of the irreplaceable value of a father in a child’s life. Men who choose to abandon their children and women whose chosen lifestyle robs a child of a father selfishly deprive them of a fundamental necessity for security and well-being.

There’s so much in the news lately about supposed indiscretions and compromising relationships between members of the Trump administration and those of Russia’s Vladimir Putin. How quickly the liberal news media forget similar overtures by the Obama administration, including his “hot mic” comment about Putin giving him “space” until after he’s elected and can be more “flexible.”

← There’s something wrong with us
The solution →